Now we move into Leviticus, the book of the Law:

Leviticus 13:45-46 (NIV) – “Anyone with such a defiling disease must wear torn clothes, let their hair be unkempt, cover the lower part of their face and cry out, ‘Unclean! Unclean!’ As long as they have the disease they remain unclean. They must live alone; they must live outside the camp."

This section of Scripture speaks to the control of disease, using quarantines when there was no cure and the disease in question appeared to be contagious. This is talking mostly about the ostracism of the incurable (lepers) in the desert where the Jews spent 40 years wandering until all who left Egypt had died (except two) and the LORD then led them into the promised land.

Does this sound familiar, in these days of COVID-19 and the corona virus? Social distancing, wearing masks, being "clean" (washing our hands and the surfaces we touch). Being asked (or told) not to leave our homes?

One thing is different, however, the Jews quarantined the person who was infected and it was incumbent on that person to tell everyone to stay away by shouting "Unclean!" Today everyone is encouraged to stay at home because we can not tell who is infected. Only those with symptoms, or a positive test, must be quarantined but everyone (sick or not) must wear a mask and stay six feet apart instead of shouting Unclean!

So that you can distinguish between the holy and the common,
between the unclean and the clean,
- Leviticus 10:10 (NIV)

Leprosy is a mildly contagious skin disease which had no cure at that time. It is a long-term infection by the bacteria Mycobacterium leprae. It can sometimes take up to 20 years to develop. Infections can lead to damage of the nerves, respiratory tract, skin, and eyes. The nerve damage creates a lack of pain sensation, which can result in damage to and loss of a person's extremities from repeated injuries or further infection of unnoticed wounds. Transmission of leprosy occurs during close contact with those who are infected. 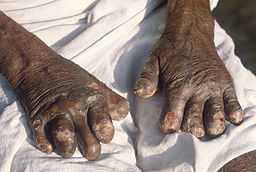 Although Leprosy is only mildly contagious, it created a stigma for those with the disease and others were fearful of contracting it. So in following the advice of this verse, the Jews would quarantine those with leprosy outside of the camp to prevent the spreading of the disease. Here we see God directing his people to follow medical practices against a disease even though they knew nothing about how or why people got the disease.

People with the disease were required to cover their mouth (wear a mask). The transmission of leprosy is not well understood, but the upper respiratory tract is thought to be the most likely route of infection. They also had to be confined to specific areas to live so as not to infect otherwise healthy people.

Psalm 52:8 (NIV) - But I am like an olive tree flourishing in the house of God; I trust in God's unfailing love for ever and ever.

God did not take away the suffering and stigma of the disease but he provided his people with a way to deal with the struggle. We need to learn that we will not be free of pain and suffering in this life but God is always with us, nonetheless.

Job 26:7 - He spreads out the northern skies over empty space; he suspends the earth over nothing.
Posted by God's Chemistry Set at 4:40 PM 6 comments: