Returning to Job we will consider verse 26:7 (NIV):

Job 26:7 (NIV) - He spreads out the northern skies over empty space; he suspends the earth over nothing.

Another scripture to look at in connection with Job 26:7 is this one:

Job 38:31-33 (NIV) – Can you bind the chains of the Pleiades, or loose the cords of Orion? Can you lead forth a constellation in its season, and guide the Bear with her satellites? Do you know the ordinances of the heavens, or fix their rule over the earth?

These sections of Scripture discuss gravity and the "empty space" that fills the void between the stars. Gravity holds the planets up on seemingly nothing. The Sun “rules” over the Earth (holds it in an orbit). Scientifically, we know that gravity is one of, and the weakest of, the four fundamental forces. It causes any two bodies to be attracted to each other, with the force proportional to the product of their masses and inversely proportional to the square of the distance between them.

Gravity caused the original gaseous matter present in the Universe to begin to coalesce and form stars and caused the stars to group together into galaxies. It did the same to form planets. Gravity is the force by which all things with mass or energy are brought together. Gravity gives weight to things on Earth and the Moon's gravity helps form the tides we see on Earth. It even holds the atmosphere around the Earth that otherwise would be torn away by the Solar wind.

The most extreme example of gravity is a Black Hole, from which nothing—not even light—can escape once it passes the Black Hole's event horizon.

The Pleiades and Orion are the only two constellations where the stars in them are bound by gravity to one another so they move as a unit (they are in the same galactic location). Other constellations appear together but some of the stars are much further away from us and only look close due to our angle of view. Stars are constantly moving relative to one another, as is the Earth, the Moon and any planet circling a star.

Because of the vast distances within the Universe, the stars seem to stay in one place but over extremely long periods of time (thousands to millions of years) they will gradually move apart - the constellations will change shape. The constellations that are not within a single galactic location will retain their appearance for a much shorter time as the stars within them will be moving independent of one another.

When I consider your heavens, the work of your fingers,
the moon and the stars, which you have set in place,
what is mankind that you are mindful of them,
human beings that you care for them? - Psalms 8:3-4 (NIV) 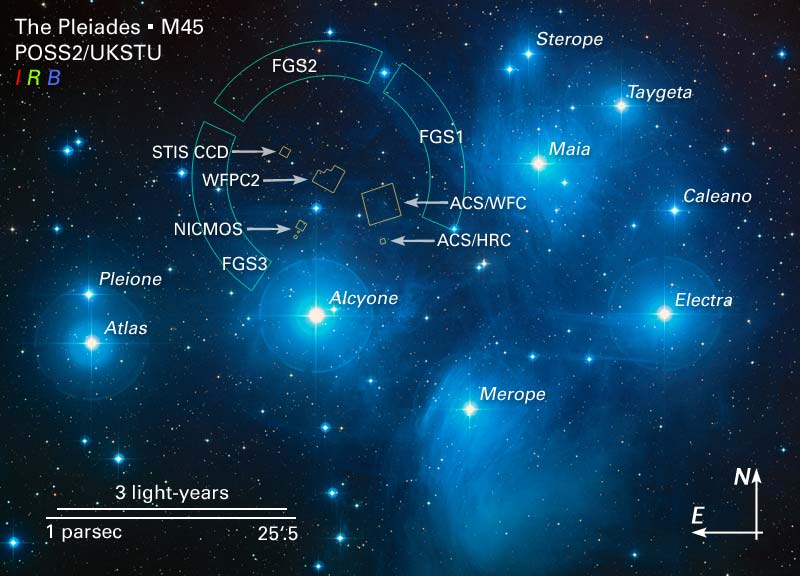 The Pleiades is among the star clusters nearest to Earth and is the cluster most obvious to the naked eye in the night sky.

Orion is a prominent constellation located on the celestial equator and is visible throughout the world. Along with the Pleiades, Orion is one of the most conspicuous and recognizable star systems visible with the naked eye. Orion is also useful as an aid to locating other stars. Its seven brightest stars form a distinctive hourglass-shaped pattern that points towards other visible stars, such as Sirius, the brightest star in the night sky. Sirius is a binary star (Sirius A and B) and is also one of our nearest neighbors in the Milky Way.

Amos 5:8 (NIV) - He who made the Pleiades and Orion, who turns midnight into dawn and darkens day into night, who calls for the waters of the sea and pours them out over the face of the land— the LORD is his name.